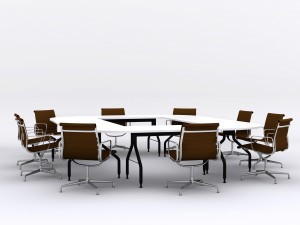 Board meetings are important, even if it’s just a small board meeting. They provide a time and place for the board of directors to make decisions regarding the future of the company and vote on current issues.

While board meetings are necessary for both large and small boards, smaller board meetings have less procedure and rules involved. Below is an excerpt from Robert’s Rules of Order concerning board meetings with 12 people or less.

“In a board meeting where there are not more than about a dozen members present, some of the formality that is necessary in a large assembly would hinder business. The rules governing such meetings are different from the rules that hold in other assemblies, in the following respects:

To Limit Debate: When members of the assembly call out informally, “Question! Question!”, it means only that they as individuals are ready to vote on the pending question or motion. This informal “call for the question” by members must be clearly differentiated from the formal motion “to close debate and vote immediately on the pending question”, (or what is exactly the same) the formal “I move the previous question”.

To Close Debate: “I move the previous Question” is the old, brief way of moving to close debate. The current formal way of closing debate is “I move that we close debate and vote immediately on the pending question”. Requires a second. Is not debatable nor can it have a subsidiary motion to amend. Requires a two-thirds vote to pass.

NOTE: Copies of Roberts Rules of Order are available at most book stores. It is recommended the Chairman have a copy of “Parliamentary Procedure at a glance”.

Use these rules to help you hold your next board meeting. Whether you’re a community board or a small company, board meetings are essential to success. Everyone working for the company needs to be on the same page, and board meetings provide a place for everyone to gather, provide opinions and make decisions.

“I want to wish a Happy New Year to all our ORNA staff. All of you guys are a great staff to work with. God bless you guys and let’s continue working with the determination and the character that you guys have. Thank you very much and I will see you soon.” Nasser Pierre-Louis, ORNA… Read More »

“I cannot thank you enough for your assistance this last week. Your quick response was perfect for our needs. EVERY SINGLE ONE of your staff was professional, helpful & courteous. I’m thinking of stealing some of your employees (just kidding). You are definitely our security team from here on out. Thanks again.”

“We are very pleased with the employees that ORNA sent us this year. We hope that you continue your good service in years to come….”

“For the past 16 years, ORNA has always been service oriented…their officers have built wonderful long standing relationships with our residents and can identify most by name…making our folks feel special and safe….”

“ORNA is very professional … they always have people here on time, well dressed, respectful … that’s why we keep them …”

Your Guide to Security Guards vs Computer Surveillance Technology is evolving day by day and minute by minute. Whether you’re at home or at work, everyone wants to ensure that they are doing everything in their power to maintain the safest environment possible. The technological evolution has led to the question of whether or not… Read More »